Today, I want to talk to you about the complexity of leading a large team. The larger the team, we see an increasing amount of complexity. As your team grows, so does the complexity of things like communication. Let’s take a look at that one. 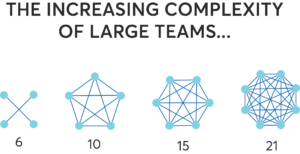 When we look at the next thing, I think you are going to see it’s really important too. That’s the return on work. We see a diminishing return on work the larger the team. Remember we’ve said before if you are wanting to develop people, you need something in this category. If you just want to delegate or dump you can increase the numbers, but it’s not near as effective as making sure you have smaller teams.

For instance, if you say, “I have a team of 20 people on my parking crew.” I would break those down into three different groups and add a captain. Adding that layer is not something that we are doing that is going to create more confusion, or further dissuade communication from happening. It actually gives an opportunity for someone else to be developed and it helps you increase the care, the communication, and the return on work.

Now that you understand the increasing complexity of large teams, what are you going to do about it?