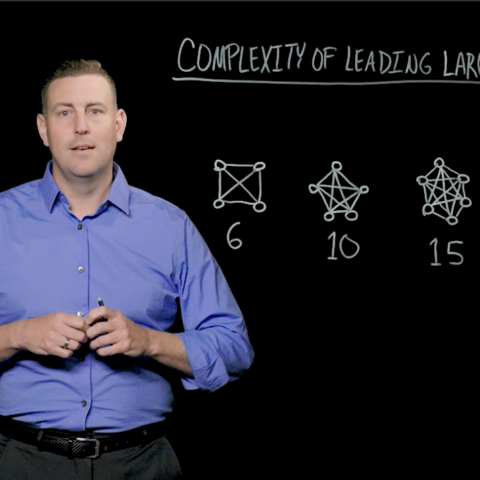 Today I want to talk to you about the complexity of leading large teams. Now, as your team grows, so does the complexity of communication, the return on work, and your ability to develop people. Now, let’s take a look at this.

As we add people, it becomes more and more likely that communication will break down, or things are just going to become unclear. It’s complex. It also impacts the group dynamics. It effects how they relate to one another, and if they do so in an effective way.

In an ideal scenario, your team size should be no more than six or seven people. This will mitigate those issues. For teams that grow larger, you need to consider another layer of leadership. For example, let’s say you have twenty people on your parking team, you need to add three captains to that parking team to oversee six or seven people each. Adding this role gives you the opportunity to elevate leaders, to develop them, to develop those captains as well as create clarity and focus for each of the individual team members. They are going to be served better. They are going to be more clear on what their role is. They are going to be developed better.

Now that you understand the increasing complexity of large teams, what are you going to do about it?