If you look at Jesus’ relationship with the disciples, Jesus modeled not only how recruiting and development occurs but also how responsibility is transferred, as He rarely did the work of the ministry by Himself. Sure, He spent time alone, but when He ministered to people, His disciples were always nearby. Early on, they listened and watched Jesus, but soon He asked them to serve with Him. Jesus then flipped the script and asked them to serve while He observed and helped. You see, Jesus wasn’t shirking His responsibility for the mission when He recruited and commissioned His disciples; He was sharing it.

This diagram illustrates four steps to develop someone in their ministry role.1 Like Jesus and the disciples, gradually a transfer of responsibility must occur. These four phases allow the developer to relinquish authority and fully prepare and equip a new leader in their role. 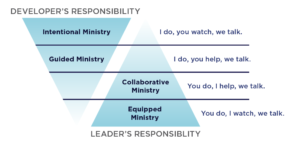 First, when you look at the developer’s responsibility, you see the word “intentional.” Intentional ministry means that I do, you watch, then we talk about it. In each of these four steps, there is always a feedback and coaching component. For example, if I’m a small group leader and you’re a small group apprentice, I lead the group discussion, you observe, then we talk about it.

Maybe we do that for a week or two, then we move into the second phase: Guided. During this step, “I do, you help, and we talk about it.” So I’ve moved from leading group discussion and you watching to asking you to come alongside and help me facilitate the conversation.

Next, we move into collaborative ministry. Here’s where we flip the script. You do, I help, then we talk. Now you’re primarily leading group discussion, and I’m there to jump in and help as needed. When we talk, we have the opportunity to troubleshoot and discuss what’s working well and what’s not working well.

Finally, we move into the equipped phase. Now you’re doing the work. I’m just watching but am still giving you feedback. I’ve released ministry responsibility to you and now you’re able to lead your own small group. These four phases may take weeks or even months to complete. It really depends on the level of responsibilities and specifics of that role.

Even though equipped ministry is the last of these four phases, it doesn’t end here. Now that you’ve walked through this framework with me, you’re equipped to do it again, this time as the developer of someone else. You have experienced this model yourself and know what it takes to raise up another leader, so you can repeat the process with a new potential leader. Then they can do the same.

The great thing about this model is that can be introduced and replicated at all leadership levels and in all ministry roles. A seasoned volunteer in the church nursery can recruit and develop a new nursery volunteer. An usher can identify and train a new usher. A youth teacher can recruit and help a teacher launch a new class.

Jesus and the early church leaders modeled a way of healthy leadership reproduction that moves past simple addition to multiplication: recruit, develop, and repeat. If we model this leadership development method as church leaders, we will quickly see it take hold and deeply embed recruiting and development into our church culture. Remember Ephesians 4 and that as church leaders we are all called to that end. Let’s make sure our legacy is not just about the things we accomplished but the people we developed.

Want to learn more about recruiting volunteers in your church? Download Creating and Curating a Recruiting Culture by Todd Adkins here.